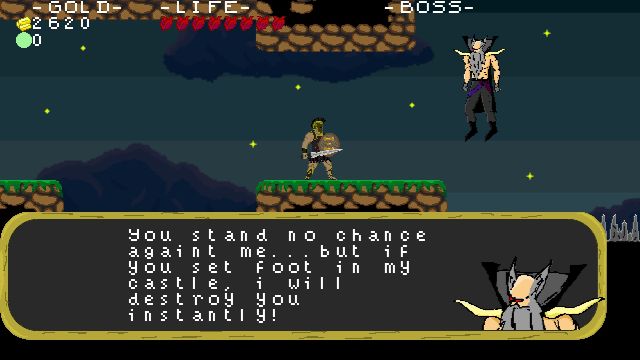 Nobody likes the petty online guru who’s obsessed with the correcting of everyone. The people are particularly irritated when this guy pops up and tells anyone that a media item doesn’t belong into a specific category. I’m not this person, but if the game is described as being part of a certain genre, I would hope it plays according to the category.
For example, Xenia’s Steam page promotes it as the “Metroidvania” title. This usually means that the game is a platformer that has an unlinear layout and inaccessible sections of a map which you can traverse after you’ve mastered a new ability or item. This time, however the game being played provides your typical linear, level-by-level hack and shred platformer experience with no connected passageways or any new skills to unlock.

I’m aware that I shouldn’t be caught up in the process of defining a game but when I lay my dirty money for a certain kind of video game, I’d like that kind of video game. Xenia’s absence of Metroid-style appearance only served only to make me more disappointed at first, and it was only worse as the campaign progressed…

In this game, you play the role of an ancient blacksmith from Ancient Greece who has crafted tools to save his queen from a sly sorcerer. There’s not much more to the story other than that: you race through what appears to be Greece and attack vicious creatures and robed characters using your sword. You stop to collect gold and spend it for a few permanent boosters (either increasing your hit points, or providing an invincibility frame that is longer) or costly potions which offer marginal help.

Even if this had been a legitimate pathfinder, it would have been worth the effort. It’s clear when you begin the game and are captivated by its uninspiring presentation as well as an soundtrack that captures nature of someone playing on the keyboard. It gets worse as you continue to take on the most basic of enemies like bats, snakes, beetles and skulls that are not headless.

The unimaginative bestiary isn’t the only issue here the honor belongs to the fight itself. Our hero flings his sword with a downward attack with a terrible reach. Sometimes, you must hug your enemies to hurt them. And sometimes, that even being in the same space is ineffective. This shouldn’t come as a surprise since hit detection is all over the course of this adventure. There are plenty of instances when your sword is able to pass through the enemy’s body ineffectively and there are times when you fall on the ground with spikes or in a fiery pit, and suffer no injury whatsoever instead of dying instantly. The erratic hit detection is just adding more cheese.

There’s not much to discuss this game since it’s a basic action-packed. I understand that a lot of indie games are based on classic titles and are made to look retro However, this one isn’t just a relic of the past. It appears more old-fashioned, as if it was a viable option in the early 1980s. The most successful faux-retro games of the present have modern aesthetics, while using innovative features, fast mechanics, amazing combat or enticing design concepts that are centered about problem-solving. Please be aware that when I criticize in this title, I’m not doing it to prove that it’s not ” Metroid enough” according to the description. I’m doing it due to the fact that it’s completely lacking in personality as well as having stodgy mechanics. Even with the decently designed levels, the game proves to be mediocre and dull at most. At best…